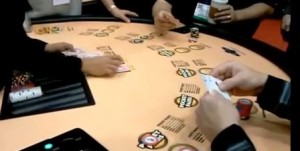 No-Flop Pineapple is a game you’ll find in a few casinos these days. Pineapple is a community card game like Texas Hold ‘Em or Omaha, but it is played as a table game like Blackjack or Let It Ride. Because it has a turn and a river, but no flop, No-Flop Pineapple plays faster than many poker games. Casinos like that factor, because the gambler is exposed to the house edge more hands per hour.

Every time I’ve seen No-Flop Pineapple in a casino, it’s played at a bright-looking yellow table. That might be local to my favorite casinos, though. This game is not hard to play, but the rules are a bit different than what most poker players are used to. The strategies are much different. On this page, I’ll cover the basic rules, and give a handful of helpful tips and suggestions when playing.

When a hand begins, the player places a mandatory ante bet and an optional “pocket pairs” bet. This is a typical table game side bet, in which you are paid off if you receive a pair on the deal. Pairs come up more often in Pineapple than most hole card games, but keep in mind that the side bet (while paying well) has a worse house edge than the main bet.

Once the bets are made, you and every other player at the table will be dealt 3 cards apiece. These are your cards and no one else’s, and they are deal face down (“hole cards”). The dealer also receives three face-down cards. Also, two community cards are placed face-down in the center of the table.

Each player takes a look at their cards and keeps two of them. In other words, you’ll discard one of your three hole cards. This is where most of the strategy is focused in the game, so memorize the basic strategy for the card combinations you receive. In most cases, lifelong poker players will be able to make these determinations through common sense, keeping pairs and the like. Keep in mind that the player ends up with four cards and not five, so this changes basic strategy a good deal.

This game has its distinctive name because it has no flop, the way Omaha or Texas Hold ‘Em would. Instead, you proceed directly to the turn card. This is revealed and becomes a part of your hand. Once the turn card is revealed, you’ll have a decision to make of whether to bet or fold.

Betting on the Turn

If you want to make a turn bet, you’ll have to place a wager which is twice the size of you ante bet. If you don’t like your cards and you don’t want to throw good money after bad, then fold your hand and forfeit the ante bet. Once again, read instructions on which hands are worth betting on and which ones require a fold. 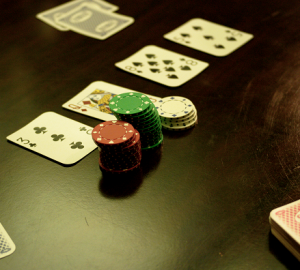 Cards and poker chips on a table

The second community card (“the river”) is turned face-up. This becomes the fourth and final card in your hand. No more betting occurs after the river card is revealed, so you won’t have to decide whether to fold. At this point, the dealer has a decision to make, and then you compare your hand against the dealer’s hand.

This is the point where the dealer decides which card to discard. Note that this is a major point in the dealer’s favor. You must decide which card to decide before seeing either the turn or the river. The dealer gets to see the turn and river, and then build the strongest hand with that knowledge. As always, the casino builds in an advantage for their side of the wager.

Also, an “Ante Bonus” is paid out at this point, regardless of the outcome of the hand. To win the Ante Bonus, you need a flush or better. If you received a four of a kind, the Ante Bonus pays 40:1. If you got a straight flush, the payout is 20:1. A straight pays at 2:1, while a flush pays at 1:1. Keep in mind that straights and flushes are going to be a bit more common in Pineapple, since you only need to 4 cards to match and not 5. At the same time, the four of a kind is going to be less common, because you need to match all 4 cards, instead of 4 out of 5 cards.

When you have three singletons and the lowest cards are suited, this become a bit more complicated. In most cases, the best play is to keep the highest two cards, which would (of course) be unsuited. If a straight flush remains a possibility, your best strategy is to keep your two suited cards (and the chance at a 20-to-1 payout). A number of exceptions to discarding the suited low card exists, so study a good No-Flop Pineapple basic strategy chart to learn which strategy to employ.