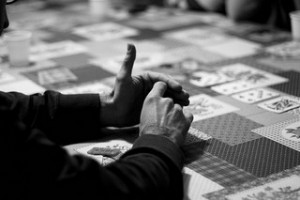 Oxford Stud is a lesser known variant of poker which combines elements of community card games with seven-card stud. Oxford Stud Poker is thus interesting to 21st century card players because it’s played like an amalgam of the two most popular forms of poker in many land-based casinos, especially on the east coast of the United States (where seven-card stud traditionally has been most popular).

Several versions of the game exist. For our purposes here, I’ll discuss the most common form of the game, which was played by students at MIT in the 1960s. In the age of ascendance for Texas Hold’em, people naturally assume that Omaha and Holdem are the only community card games. Such games have been around for generations, though.

As they say of certain gizmos in the modern world, Oxford Stud has many moving parts. The basic premise is a game in which players receive individual downcards and individual upcards, as well as community cards. When a round of play begins, each player receives two downcards and one upcard, the same as they would in a standard game of seven-card stud.

Because Oxford Stud is a combination community card/stud poker game, the house needs to determine who begins betting. In seven-card stud, the player with the highest upcard makes the first bet. In community card games like Texas Holdem, a set player is the one who bets (determined by where the “button” is at on the table). In most versions of Oxford Stud, the player with the best card showing makes the first bet.

In some versions of 7-card stud, the player with the worst card showing starts the first betting round, forcing them to make the Bring-in bet. That is the most common rule for Oxford Stud, so expect to make the bring-in wager if you are holding the lowest upcard. Bets follow this wager, completing the first round of betting.

When the first new set of cards are dealt, they are dealt as two community card. Thus, each player should have 5 cards with which to make a hand, including 1 upcard, 2 downcards, and 2 community cards. In this round of betting, the player with the best hand showing makes the first wager.

So if someone holds A-K-10 and another holds 2-2-10, then the player with the pair showing (2-2-10) would make the first wager. Again, a second round of betting follows. 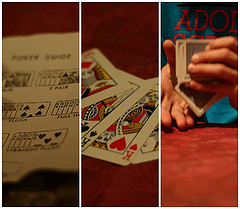 After the third round of betting happens, then a third and final community card is dealt. This is followed by a fourth betting round. Once again, the player with the best hand showing begins the wagering round. Five cards are now showing for each player (3 community cards and 2 upcards), so a gambler could be showing a flush or a straight.

This is where Oxford Stud Poker gets really interesting. While the lead better might be showing a terrific hand, their opponents each have two hole cards, so they could be set up for a dominant hand on the showdown.

Why Oxford Stud Is So Great

Stud has a reputation as a hardcore poker player’s game, because raises and bluffs can have tremendous effect on one’s opponents. Like seven-card stud, Oxford Stud is a game for those with ice-water in their veins.

Pot resolution can be a little more complicated in Oxford Stud Hi/Lo Split than it is in games like Texas Holdem. This is common with games which use the hi/lo game dynamic. There is a reason that the game was popular with students at the Massachusetts Institute of Technology, which is known for training brilliant scientists and technologists.

Oxford Stud offers a variation of poker with enough oddball elements to be novel to longtime gamblers. At the same time, those game elements are familiar to veterans, so they don’t feel like they’re playing a duffer’s game. Some beginning players may find the switch between upcards and community cards to be confusing. Those who don’t enjoy the complexities of high-low poker might not enjoy Oxford Stud, either. Otherwise, it’s a game which provides maximum novelty, without relying on tricked-up rules such as wild cards.

This poker variant is most comparable to seven-card stud hi/lo. Many poker players these days are so used to community card games like Texas Hold’em and Omaha Hold’em. Often, they don’t want to try stud and draw poker. If you know people among your card playing group who fit that description, suggest a session of Oxford Stud. It provides a bridge into the world of stud poker, while giving them a slightly more familiar game than seven-card stud or five-card stud would.