Rabbit Hunter is a variant of poker in which the cards later in the hand are revealed, even if the hand does not go to a showdown. In a typical game of poker, dealers are not allowed to make such disclosures, for two major reasons. On the one hand, laying out the cars slows the game, which can be boring for players and less profitable for the house. Two, showing the cards reveals information about concealed hands that otherwise would not be known. 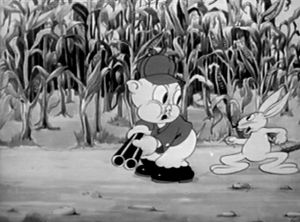 In a typical gaming scenario, a Texas hold’em player sees the flop and has a straight draw (for instance). The gambler has 4 to a straight, but the opponent makes an all-in raise. The player still has enough chips that they don’t feel like they’re in a desperation situation, so they fold their hand. Still, the player wants to know what would have happened if they had called the all-in raise–whether they made “the right call”–they will go rabbit hunting. In practice, the player asks the dealer to play out the hand, revealing whether they would have made the straight.

Rabbit hunting is frowned upon in a casino playing situation, for the reasons stated above. Some casinos might have rabbit hunter rules. If that’s the case, read below for the common rules for such a game.

In Texas holdem, the rules of rabbit hunting are much the same as standard holdem, with one of two minor variations. Each of the players at the table receive two hole cards, which are dealt face-down to them individually. The table also receives five community cards. These cards are dealt face-up in three successive phases: the flop, the turn, and the river. Four rounds of betting occur: the pre-flop bet, the post-flop bet, the bet on the turn, and the bet on the river.

At a typical online or offline Texas hold’em table, 9 players are placed at the table (when possible). Besides the voluntary betting, action is driven by the blind bets, which include a small blind and a big blind. In practice, this means that two players at the table each hand are required to make a minimum wager, regardless of the cards they hold. The onus of betting on the blinds rotates around the table, so that at a typical Texas hold’em table, the player bets in the blind 2/9ths of the time. The big blind is twice the size of the small blind. In a pre-flop scenario, the person to the left of the big blind is the first person to bet.

Most of the time, two or more players are going to pay to see the flop. That means rabbit hunting won’t be needed in these cases, because everyone at the table will see the flop, which is the first three community cards. These are revealed all at once. Now that 3/5 of the community cards are revealed, a pivotal hand of betting occurs. In a post-flop situation (flop/turn/river), the person to the left of the dealer button is the first one to place a bet.

Among gamblers, the most popular form of holdem is no-limit Texas hold’em, though pot-limit and other forms of limit holdem also have significant popularity. In NL Texas holdem, a person can re-raise bets if another player raises, and a player can go all-in at any time. Players cannot bet more than they have in their chip stack. If you have the larger stack of chips, that means you bet the amount of your opponent’s chip stack, putting them in jeopardy of busting out if they call the all-in raise and lose. If you have the smaller chip stack, then you place yourself in the same jeopardy. The upside is you can double-up your chip stack, if you win.

Because of the wild swings and finality of no-limit poker, it is tempting to want to see what the cards would have been, even if you don’t choose to make the all-in call. Therefore, you’ll see players asking to hunt the rabbit more often in no-limit games than any other. Before making such a request, ask what the rabbit hunting rules in the casino (or at the table) are.

In home games, rabbit hunter rules are common. Before asking to see the cards in these situations, ask what the house rules are regarding rabbit hunting first. In the absence of such rules, ask for stipulations to be set to avoid confusion or disagreements.

Seeing the Cards in Online Gambling

Virtually no online poker rooms are going to allow rabbit hunter rules in their games, unless special promotions are taking place. The only online casino I know that provides for rabbit hunter options in their software package is Carbon Poker, an Australia-based website in the Merge Gaming Network.

Carbon Poker was founded in 2005, but it was purchased by Poker.com in 2007 and combined with the Merge Poker Network. It is licensed by the Kahnawake Gaming Commission and, according to one authority site, Merge is considered a top 15 site in terms of player community. Such statistics are not easy to confirm in the online gambling industry.

Another reason rabbit hunting is frowned upon is that it can slow action. If a gambler has to pay to the see the cards, then curiosity sometimes gets the better of them and they make the call. If a player doesn’t have to pay to see the cards, then some will be much less likely to make the call. Since casinos and betters alike want to see action, rabbit hunting is considered a lesser form of the game.

Rabbit hunt poker is sometimes referred to as “fox hunt” poker, too. If you find a casino table with “fox hunt poker”, then it likely has the same or similar rules as those described above.