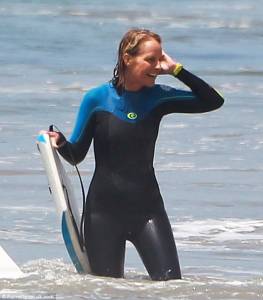 Helen Hunt Is Ready to “Catch a Wave”

Catch a Wave is a card game which has been played in a few casinos, but which isn’t in fashion at present. Anyone playing at the Foxwoods Casino in Connecticut in the early years of the 21st century might remember the game, as it was played there for a handful of years. A handful of online casino software packages contain “Catch a Wave”, so I’d like to give a brief description.

Catch a Wave is played with 8 combined 52-card decks. The standard card ranks apply in the game, so new players should have no trouble learning how to play. Card suit does not matter in the game, so disregard hearts, aces, clubs, and diamonds.

To begin a new hand, the player makes a wager. Next, the dealer deals a card each to the player and the house (dealer). The dealer’s card is dealt face-up, giving betters an additional piece of information. After seeing their card, the player has an option to either hit or stand. When hitting, the player must correctly guess whether the next card to be dealt will be higher or lower than the card he or she is holding. If the player’s call is incorrect (or if the cards are equal), the gambler loses the bet.

If the player’s call is correct, the player once again has the option to stand or hit. All players whose call “stand” must wait to see if they win their wager.

All other gamblers must wait for the outcome of the dealer’s hand to see if they win and are paid.

Once the first hand is played, new dealer rules apply. From the second hand forward, the dealer calls “higher” when holding a 4 or less. The dealer calls “less” when holding a jack or higher. If the dealer’s card is between 5 and 10, then they stand. This continues until the dealer either stands or makes an incorrect call. The dealer doesn’t catch a wave, so if six correct calls were made, then the hand would simply continue until the house either stand or makes an incorrect call.

One reason this game was phased out is the (relatively) long time required to play a hand. While the game doesn’t have as many pushes as Pai Gow Poker, but it does have a decent number of pushes. Casinos can make more money offering other table games, such as Card Sharks (which is what Foxwoods Casino chose as the replacement for Catch a Wave).

Another major reason this game isn’t found in casinos as much is the low house edge. Assuming optimal play using the basic strategy chart, the house edge sits at 0.50% in many versions of the game. Therefore, if you find an online version of Catch a Wave, it’s worth your while to learn the game. Your odds will be better than most any other game in the casino, besides blackjack and video poker. In fact, your expected return should be comparable to most versions of those two casino favorites.

Strategies about whether to hit or stand during a hand are based on a combination of how many successful hits you already have, along with the strength of the upcard the dealer is showing. While strategy is intuitive in many cases, the basic strategy chart does look complicated to the novice player, due to the fact it changes according to whether you have 0 hits, 1 hit, 2 hits, 3 hits, 4 hits, or 5 hits.

Most strategy charts suggest a range of numbers when the player should stand (not hit). Therefore, if the chart reads for 6-10 or 7-9, then these are the card ranks on which you should stand. For this reason, the word “none” means you should always hit in this particular scenario.

Remember that you can take a strategy card into the casino with you and use it as a prompt to make your plays. This is allowed so long as using your cheatsheet doesn’t slow down play for the other player at the table, which it shouldn’t. Therefore, I suggest beginning and even intermediate players should print off a free printable reference card and have it at their side when playing “Catch a Wave”, whether in a live or online playing environment.