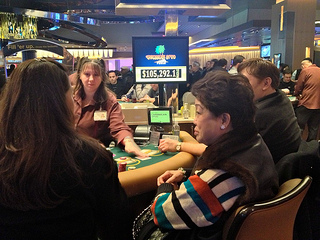 It’s Poker with a Caribbean Flare

Caribbean stud poker is a game popular with new visitors to the casino, because it doesn’t have the bluffing and reading required to succeed at many traditional poker games. In Caribbean stud poker, the player is pitted against the house (dealer), instead of the other players at the table. This means gamblers can chat with other players and share camaraderie, instead of having adversarial roles. Since it is a casino table game and not a poker variant like Texas hold’em or Omaha, the game is played on the casino floor and not in the poker room.

The game of Caribbean stud poker plays much like five-card stud. Since many gamblers start playing five-card draw or five-card stud as a child, Caribbean stud is going to be familiar to them when first stepping into a casino. As you can see, the game was designed (by Shufflemaster Inc.) for casual players. In fact, the legend sprung up that the game was invented on a Caribbean cruise ship bound for Aruba. Though this myth has since been dispelled, this should give you an idea of the type of player most often attracted to Caribbean stud poker. In truth, the game was invented in 1982 or shortly after by David Sklansky, who sold it to a game designer, who then introduced to the Excelsior Hotel in Aruba. When Steve Suttle learned the game from a player in Las Vegas (and purchased it from him), he sold the idea Binion’s Horseshoe Casino in Las Vegas, where it began to gain its reputation.

Caribbean stud poker offers both a main bet and a side bet. In discussing the game, I’ll analyze both of these betting options. It’s the side bet which offers an accumulated or progressive jackpot, though the house edge on this game is higher than the main bet’s house edge.

In the main game, each of the players receives 5 cards, while the dealer receives an additional 5 cards. All player cards are dealt face down. While a gambler can look at his or her cards, the player cannot share information with other players at the table. One of the dealer’s cards is dealt face-up, but the others are hole cards.

After looking at the cards, the player must choose to either fold or raise their bet. The raise bet must be twice the ante bet. If the player folds, then they lose their ante and side bet, if a side bet was made.

If the player raises their bet, then the dealer turns over the house cards. This hand must “qualify” to win the bet. To qualify, the dealer must have an ace-king or better. That is, their minimum qualifying hand must include at least an ace and a king (but no pairs). The minimum qualifying hand would be an A-K-4-3-2. Any hand that would beat an A-K high would also qualify: any pair, two pairs, three of a kind, straight, flush, full house, four of a kind, straight flush, or royal flush.

If the dealer’s hand fails to qualify, then the player receives a 1:1 payout on the ante bet. The raise would be considered a push, in this case.

Of course, if the player’s hand beats the dealer’s hand outright, then they win a payout on the ante and the raise. Once the dealer’s hand is revealed, then the ante bet wins even money. The raised bet would pay out according to a number of pay charts. The most common pay table in the United States would include a 100:1 for a royal flush, 50:1 for a straight flush, 20:1 for a four of a kind, 7:1 for a full house, 5:1 for a flush, 4:1 for a straight, 3:1 for a three of a kind, 2:1 for two pairs, and 1:1 for any other winning hand. The payouts aren’t that great, considering you must build these hands with only 5 cards and no draws. Gamblers should keep in mind the house must qualify to win, so this provides additional (significant) advantages for the player.

The house edge in a traditional game of Caribbean stud poker is 5.22%. This is a significant house edge for a game which has a strategy element, though it is slightly better than American roulette, keno, and most slot machines. The combination of poker rules, a casual play style, and a progressive jackpot makes this a favorite with vacationers and new players, though. To get the real excitement of the game, we need to discuss the progressive jackpot side bet.

In the United Kingdom, you’ll find Caribbean stud poker called “Casino Five Card Stud Poker”. Two versions of this game are prevalent. If the game does not include the jackpot bonus, you’ll see it called by the aforementioned name. If the game does include a progressive jackpot bonus, then you’ll often see the game referred to as “Casino Jackpot Five Card Stud Poker”. While the rules between the American and English versions are similar, the payouts are different. In the British version, the jackpot is often no more than £10,000. This is the variation of Caribbean stud poker you’ll find in most UK and European land-based casinos.