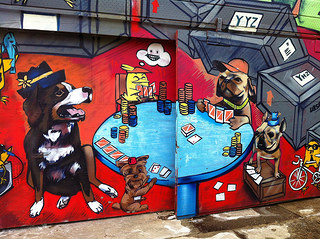 “Red Dog” is a card game offered by a sizable number of land-based casinos and a most online casinos. The game is also known by the names “Red Dog Poker” or yablon. Red Dog is a variation of Acey-Deucey, which is also known as In-Between or Sheets. Therefore, you might find the game offered under a number of different names in a casino, though Red Dog is the most common in a licensed casino setting.

Red Dog isn’t as popular in brick-and-mortar gambling venues as it once was, as casinos have replaced yablon tables with newer games like Let It Ride or Three Card Poker. Most Internet casino gaming sites offer a version of Red Dog Poker and it has a following, so the game is likely to remain relevant for some time to come. In most cases, the game will be found among the table games list under the name “Red Dog”.

Red Dog uses a traditional 52-card deck, though casinos might use anywhere between a single deck to 8 decks. The house edge varies a full 0.4%, depending on the number of decks. The reason a greater deck size lowers the casino’s advantage has to do with the number of possible winning cards in relation to the overall deck size. With a lower number of cards, the options for winning are weighted heavily, depending on the cards which have gone out of the deck. The effect is watered down when dealing with larger deck sizes. 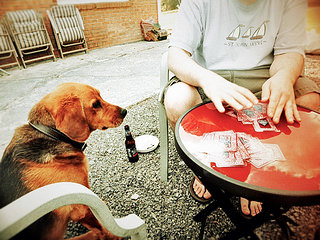 To begin a hand of Red Dog, three cards are dealt, with two of the cards dealt face-up. These are the only three cards that will be played at a given time. The suit of the card makes no difference in Acey-Deucey, so pay no attention to suited cards. When the two cards are shown, it is determined whether the hand is a push or not. If the two cards are consecutive (examples: 5-6 or queen-king), then the hand is declared a push and no money exchanges hands. If the two cards are the same number (examples: 5-5 or Q-Q), then a third card is dealt. If this third card makes a three of a kind, then an 11:1 payout is given. Otherwise, the hand is considered a push and no cash exchanges hands.

To win a hand of Red Dog, the third card must fall between the spread. So if the first two cards were a 4 and 9, then the third card would have to be a 5, 6, 7, or 8 for you to win the hand. If any other card is dealt, you lose the hand.

Once again, after the first two cards are revealed, players are offered the opportunity to raise their wager. Rarely should this be done, for reasons discussed below. In most cases, you’ll face a house edge when proceeding to the third card, so increasing your wager only increases your risk.

Red Dog offers few strategic decisions. The only time a player can affect the odds is making the right call on whether to raise their bet or not. In most situations, it is not to your advantage to increase your wager. When the spread is at 7 cards or more, this is when you should make a raise.

Despite receiving better odds with a greater number of decks, the strategies do not change when playing multi-deck games. When analyzing the odds, you’ll see that the 1:1 bet becomes a positive expectation wager only when a spread of seven or more exists, regardless of how many decks are being played.

As mentioned above, the casino’s advantage hovers between 2.75% and 3.16%. This does not represent particularly good odds, even when playing the 8-deck game. This is the main reason the game isn’t as popular in casinos as it once was. Still, many poker players learned the game playing Acey-Deucey, so they play at online casinos for the sake of nostalgia and entertainment. The house edge should be considered against the fact that more hands are pushes in Acey-Deucey than they are in other casino card games. This lowers the risk factor of playing the game somewhat, as opposed to games which always (or almost always) have a winner and a loser.