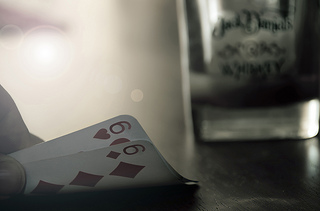 Pontoon is the name of two different forms of blackjack, which can be confusing for players. Australian pontoon is a variant of Spanish 21, so players wanting to learn about that game should read our Spanish 21 article. While Australian pontoon is popular in Australia, New Zealand, India, and Malaysia, the other version of more popular in European and American casinos, and in online casinos. The game most often called “pontoon” gained popularity in England, and can be seen as a British version of blackjack.

In British pontoon, the natural 21 isn’t called a “blackjack”, but a “pontoon”. A five-card trick is an important hand in the game. The trick is a five-card hand which doesn’t bust, and this hand pays out at 2:1, making it an exciting proposition any time you have 4 cards and haven’t busted.

That’s why Pontoon is so popular, because it offers big rewards at any point in the hand. A player can win the standard payout for a 21, but if that doesn’t hit, an even bigger payout is offered. Learning how to play three-card and four-card hands is important to learning basic strategy, because the enticement of the pontoon payout often causes novice players to take marginal hits. Read and memorize a basic strategy chart before betting on this game, or take a printable chart with you to the casino.

Pontoon can be found in a number of different online casino software packages, including Playtech, Microgaming, Cryptologic, Galewind Software, and Realtime Gaming.

In most casinos, the deck will contain eight 52-card decks. You can find smaller decks in land-based casinos, but I wouldn’t expect to. On the Internet, Bovada casino’s RTG software supports 2-deck pontoon. The hand ranks are the same as in traditional blackjack.

The top hand in Pontoon is a two-card 21, which is called a pontoon. The second best hand is the five-card trick. This is any five cards which do not bust (go over 21). The third best hand will be a non-busted hand of 21 or less, which the highest hand winning.

A hand of Pontoon is played similarly to any other hand in twenty-one. The dealer deals out two face-down cards to the player and two cards for the house. One of the dealer’s cards is facedown and the other is face-up.

The dealer peaks at their hand. This means the dealer checks to see if he or she has a pontoon. If this is the case, their hand gets overturned immediately and all wagers are paid off. This is an unforgiving rule, but keep in mind you also receive higher payouts in this game. 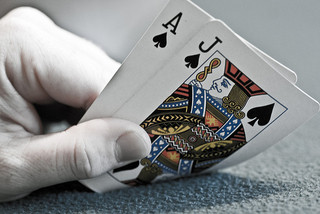 Pontoon is similar to Spanish 21 Blackjack

The player can double at any time. Also, the five-card trick rule can apply to hands after being split. One stipulation you might have to get used to is players are required to hit on hand of 14 or less (unless you hold 5 cards already). A player can stand on any hand of 15 or more, and on any hand with 5 cards in it.

Gamblers are allowed to split aces. Also, you can draw after splitting aces, so you won’t be restricted to one card, which is the case in many forms of American blackjack. If you split aces and receive a pontoon (two-card 21), this counts as a pontoon and you are paid accordingly.

If your hand busts, you immediately forfeit the hand and the house is paid. This provides the casino with a house edge, since the house can win without going through the risk of busting.

After all players’ hands have been played, the dealer turns over their cards and plays out their hand. The dealer continues to hit until a hard 17. On a soft 17, the dealer hits. If ever the dealer reaches a 5 card hand without busting, they do not have to draw any more cards.

The house edge is 0.38% on most games of Pontoon that you’ll play. If you play at a Microgaming casino, the house edge is slightly higher, at 0.39%, because the rules for splitting aces are not as liberal at the Microgaming casinos. For this reason, keep in mind you’ll need to read a different basic strategy chart when playing at a Microgaming casino. Whatever the case, the expected return of $99.61 or $99.62 on every $100 wagered is a nice return. This makes Pontoon one of the best games you’re likely to find in any casino, so long as you can achieve close to optimal play.

In the British game, you might encounter a few terms you don’t know. The word “twist” is a synonym for hit. The word “stick” is a synonym for stand. Also, if you hear someone say “buy”, they are wanting to double their bet. Buying is not the same as doubling down, though. I suggest any twenty-one player study a blackjack glossary before playing any of the game’s variants, but that is much more the case when players from the USA start to play versions of 21 popular in other countries. Part of the fun is learn new slang phrases from the blackjack lexicon.

Americans should remember that the game Australians call “pontoon” is not what they expect. With slight changes, what we call “Spanish 21” is Australian pontoon. If the names confuse you and you’re unsure, the best way to tell the difference is to take a close look at the deck being used. The Australian version uses a Spanish deck, which means the jacks, queens, and kings are removed from play. If you watch a few hands and none of these cards appear, you’ll know you’re watching Spanish 21 being played.