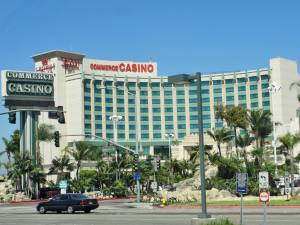 Three Card Poker Is Popular at All Kinds of Casinos

Three Card Poker is a casino table game which uses the poker card ranks, but resolves wagers in a much different way. The game offers both a main bet (“Ante and Play”) and a side bet (“Pair Plus”). Players are required to make several betting decisions during a hand, so it has a strategy aspect. Game play is quick and simple, giving casino gamblers a nice way to play a poker-style game without the hustle and bustle of the Texas hold’em tables. Of all the proprietary games in the casino these days, 3-Card Poker is the most profitable for casinos.

The version of Three Card Poker which is played in most land-based casinos in the 21st century was invented in 1994. A game designer named Derek Webb invented a game which combined the excitement of poker with the speed of a table game. This was certain to appeal to casino management, since many casual gamblers are most familiar with poker and would like to play it in the casino. A lot of novices get a little intimidated by the adversarial nature of Texas holdem, Omaha, and Seven-Card Stud, so they avoid such situations, because they know they’ll be playing more experienced gamblers. Three-Card Poker is one of a set of games which offers a nice alternative.

It should be noted that three-card poker variations have existed a long time before 1994. At least as early as the 16th century, the British played a poker-style game called “Brag”. Probably as long as poker has existed, three card variations have existed. But when Derek Webb created his version, it was at a time that casinos were looking for inventive new ways to attract customers. Mr. Webb created a company, Prime Table Games, which marketed the game in the United States and the United Kingdom. This caught on, and 3-Card Poker is now a common brick-and-mortar game. In the online casino industry, the game is found virtually everywhere.

The main bet is broken into the “Ante” and “Play” stages, which gives the main bet its name. In some casinos, the ante bet is mandatory. In many casinos, the player has the choice to make an ante bet or not. (In either case, “Pair Plus” wagers are mandatory.) Once the Ante and Pair Plus bets are made, then the dealer deals three cards to the player and three cards to the house. Players take a look at their hands. Those players who made an ante bet then must make a decision: fold or place a “play” bet. The “Play” bet is equal to the original ante wager, so the player must decide (after looking at their cards) to double their original bet or fold. If they fold, they lose their original ante bet.

After the play wager is made, then the dealer takes a look at his/her hand and all bets are resolved. A hand takes place fairly quickly, which the casino enjoys, because the game has a house edge about twice that of European roulette, craps, and baccarat. Three-Card Poker has a better house edge than American roulette, keno, and most slot machines, though. Four various pay tables exist on the ante wager and the house edge on these varies between 3.37% and 4.28%.

This wager is called “pair plus” for the same reason video poker games are called “Jacks or Better” or “Tens or Better”. A pair of anything is the basic winning bet. To win the Pairplus Bet, you’ll need at least a pair of 2’s. Note that a pair of twos is as good as a pair of aces, but this is still a high bar in a game with only three cards. Other winning hands include a flush, a straight, three of a kind, a straight flush, and (in some cases) the mini-royal. Keep in mind that flushes and straights are more common, since you only need three cards to match up, instead of the usual five. A handful of casinos offer an additional rule in which the mini royal pays out more for spades than for other suits.

Some casinos offer a “prime” payout, which pays off 4:1 if all three player cards and all three dealer cards are suited. So if you hold three hearts and the dealer holds three hearts, you win a 4 to 1 payout when the prime rules are in effect.

Caesars Entertainment casinos are known to offer an additional side bet called the “6 Card Bonus”. This pays out based on the best 5-card hand made from any combination of your 3 cards and the dealer’s 3 cards. This side bet pays if these cards combine for a three of a kind, straight, flush, full house, four of a kind, straight flush, and royal flush. So you can gauge your interest, the payout on the royal flush is 1000:1. Keep in mind you get six cards to make this hand, so your odds of hitting a royal flush are greater than in 5-card stud games and less likely in Texas hold’em and seven-card stud.

Three card poker is a fast-paced game which most novice gamblers should be able to enjoy without a whole lot of study. Knowing the card ranks and hand ranks is enough for most players. Keep in mind that the house edge is high and the game moves quickly, so regulate your bets well. Remember that any bet on the ante and play wager must be doubled if you expect to win, so keep that in mind when making your ante wager.