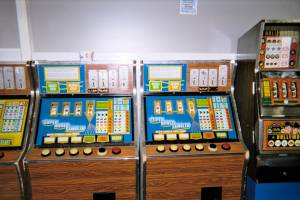 A Bank of Video Poker Games

Video poker is a type of gaming machine based on draw poker. While it’s not a card game in a technical sense, video poker gambling is based on a card game and uses the same card ranks poker players everywhere use. Because it also offers a house edge as good as you’ll find in the casino, it’s worth talking about.

The game plays like 5-card draw. At the start of each hand, the player is dealt five cards. The player has the choice of dumping 0 to 5 of these cards and asking for a redraw. The gaming machine provides a replacement card, at which point the gambler must build the best hand possible. This is where the game deviates from five-card draw.

In video poker, a gambler doesn’t play against the dealer. Also, he or she doesn’t compete against other players. Instead, winning or losing is resolved against a pay schedule, much like what you’d see in slot machine gaming or keno. If you have a certain hand, you’ll win a certain payout. The base winning hand in most forms of video poker is a pair of jacks or better. The higher ranked your hand, the more you win. I’ll discuss the rules for each of the popular games as we go along.

Video poker machines offer a low house edge, often less than 1%. In fact, some “full pay” machines have been known to pay greater than 100% expectation, meaning no house edge exists. Instead, a player who uses optimal strategy would expect to win more money than they wager. They would have a positive expectation. Of course, players who don’t learn the proper strategies would expect to lose more than they won, which is why casinos could afford to offer such pay tables.

The full pay machines are found much less now than they were found in the 1990’s. In those days, casinos offered the games to lure players into their establishments. Word got out because of books and the Internet, so video poker became a popular casino game. These days, a few casinos on the Vegas Strip or off the Strip offer a handful of full pay machines, but these are few and far between. Still, it’s routine to find video poker machines online and in land-based casinos which offer a house edge of 1% or less.

An Example of a Video Poker Pay Table

“Full pay” is a term for the version of the machine with the best payout. You’ll find many different pay tables for any given version of video poker machine. Knowing which payouts to locate differ from one title to the next, but I’ll give an example. In Jacks or Better, the machines which pay 9x the bet on a full house and 6x the bet on a flush are considered full pay machines. People often designate a Jacks or Better machine by the payouts on the full house and flush, so full pay is considered a 9/6 machine. This isn’t common, so it’s more likely you’ll be playing on 8/5 or 7/5 machines. The pay schedules can sometimes be tricky to read, with higher payouts on the rarer hands for less than full pay machines. In this case, you see big numbers at the top of the pay table and assume it’s better, though it isn’t.

Some machines offer progressive jackpots, in most cases if you hit the royal flush. The progressive jackpots accumulate with each hand played in which the royal flush isn’t hit. Due to the electronic nature of 21st century gaming, these games can be linked or networked between many different casinos, so the jackpot grows from the unsuccessful play of dozens of machines at a time. The progressives might pay out hundreds of thousands or even millions of dollars. Like any form of gambling, the more the top prize is, the lower the house edge tends to be. Players who choose to play the accumulated pot games should remember that fact. If you play on a game without a progressive jackpot, it’s called a flat-top or fixed jackpot game.

“Jacks or Better”, also known as “JoB”, is the original and basic game of video poker. If you want to win money, you’ll need to build a hand of at least a pair of jacks or better. If you receive a pair of tens, you lose. Any hand which a pair of tens would beat also loses. The winning pairs receive a 1:1 payout, while two pairs receives a 2:1 payout. The pay table continues through 3 of a kind, straight, flush, full house, 4 of a kind, straight flush, and royal flush. The royal flush is the jackpot hand.

Joker Wild or “Joker Poker” is a popular game which offers a 53rd card in the deck, a joker card which is considered a wild card. The joker substitutes for any other card in the deck. Because this makes it easier to build strong hands, a player must receive two pairs in order to win money in this game. The payouts on these games tend to range between 98% and slightly over 100%. Gamblers should learn to pay close attention to the pay table, because I’ve seen pay tables with a payout percentage as low as 93%.

In Deuces Wild, all four 2’s act as wild cards. This game provides four times the excitement than joker poker. To find the best payouts, look to see how much you’re paid for 4 deuces. The “Downtown Deuces” version pays 400x the original wager, while the other games pay out only 200x the bet. Even the not-so-ugly deuces game has a house edge of only 0.27%, so this is a great game to find. “Loose Deuces” is a game which has a 500x payout for the four deuces and has some of the best expected returns in gambling. You’ll find in Las Vegas and in online casinos.

Many “Bonus Poker” games, including the “Double Bonus” and “Double Double Bonus” varieties. In the basic game, higher bonuses are paid for certain four-of-a-kind hands. In Quick Quads, four aces pay 100x the bet, while four 2s, 3s, 4s, or 5s pay at 60x the bet. Four 6s through four kings only pay 40x the wager. This means players are more likely to keep a bunch of low cards in hopes of chasing that four of a kind, so the bonus poker strategies can be complex.