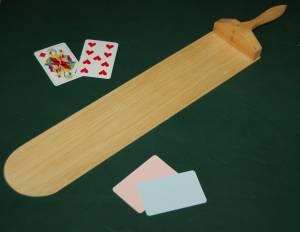 Baccarat is a game associated with high dollar players, because it is traditionally played by well-dressed players in a roped-off section of the casino. New gamblers might think such a game is “elite” because it requires special skills and knowledge. In truth, the exact opposite is true. Baccarat offers a house edge as low as any other game which doesn’t require specialized strategy knowledge, which is why casino operators haven’t always offered it to the general public. The game is easy to learn, easy to play, and requires no skill to play. One you determine how much to gamble, the game plays out with a clockwork regimentation.

One might wonder why baccarat would be a preferred game for an action movie star like James Bond, and how the movie makers can make 007’s favorite game look so exciting. I suppose the elitist nature of the game made it glamorous and mysterious to the public. In a time when people couldn’t Google the rules of baccarat, most gamblers who didn’t play knew very little of the game. So when a super spy amazes his opponents with his boldness and dash, people might not have realized he was making foolhardy gambles on a game he couldn’t control.

The object of baccarat is to get as close to 9 as possible with the two dealt cards, or three if a draw is required. Punto banco and its variants are point-based games. Suits, straights, and pairing have no meaning. Aces are worth 1 point. Tens, jacks, queens, and kings are worth 0. All cards from 2 to 9 are worth their face value. Aces are worth 1. If your hand reaches 10 or more, you simply start over the count. So a combined ten is worth “0”, a combined eleven is worth “1”, and so on.

If the player has an 8 or 9, the hand is over and the highest number wins. If the player has less than 7 or less, they may ask for a third card. The dealer may do the same. After three cards are drawn, the winner is determined. The version of the game played most often in American casinos is “punto banco”, but two other distinct versions exist.

One reason the game isn’t easy to know is the game is available in several variations. Baccarat chemin de fer and baccarat banque, also known as “a deux tableaux”, are two games which became popular in the United States. Punto banco is the variant played in the United States and Canada. This game has no decision making aspects, so no skill is required to play it.

“Chemin de Fer”, or “railroad”, is the French version of the game. Two to eight gamblers are allowed to play. In this variation, the croupier sets out a stake. The major difference in this game and the one Americans know is the fact players bet against each other, instead of the house. If a player wants to match the dealer’s stake, they are entitled to say “Banco” or “go to bank”.

Once this is done, cards are dealt: one to the players, one to the banker, another one to the players, and one more to the banker. The player with the highest stake plays for his group of bettors. If they have an 8 or 9, they turn the cards over. If their hand is higher, the dealer pays everyone’s stake. If their hand is lower, the dealer collects all wagers. The house edge in Chemin de Fer comes from the 5% commission the casino takes when the banker wins.

The variation in baccarat banque is the banker role is auctioned at the beginning of the game. This is another French and/or European variation and it is sometimes known as “a deux tableaux”, which translates into English as “two tables”. Instead of the banker role rotating around the table as in Chemin de Fer, at the start of each round, that role is determined at the start of the game. In many venues, the banker is the player with the biggest wager. I should mention that in other establishments, the decision is determined traditionally, so it rotates around the table with the right of first refusal for the player whose turn it is.

Three decks of cards are combined by the shoe deck. Once the cards are shuffled, two hands are dealt to the players and one hand to the bank. One hand is dealt to the right side of the table, while a second hand is dealt to the left side. Players must bet on the hand on their side of the table, but they have the option to bet on both player hands, if they choose. When this happens, the wager goes to the center of the table. Players can bust the dealer by “going bank”. If the player’s challenge wins, they occupy the banking seat. If they fail at three challenges, they cannot try to bust the current banker again.

Baccarat is preeminent is Macau, where it is by far the most popular casino game. Western gamblers who visit Macau might wonder at the immense popularity of the game in China’s gaming capital. Part of the allure is the fact players control their destiny, unlike slots. Though no strategy exists, the ability to choose either banker or players gives players a sense of controlling their destiny.

The idea of “flow” is innate to Chinese thought, due to the concept of “chi” flowing through the human body and our surroundings. In Macau, players are allowed to view the game without betting, so when a gambler begins, they wait a few hands to sense the flow of the cards. While rationalists will argue this has no connection to probability, it’s an important concept in the Far East and one at the heart of baccarat’s popularity.

When playing in Chinese casinos like the Venetian Macau, you’ll notice that crowds of people gather at a table when the flow of cards is thought to be good. These people bet en masse, much like the wagers at a craps table. Those who bet against the table are given dirty looks when they win–and laughed at when they lose. These people are seen as going against the flow of the game.