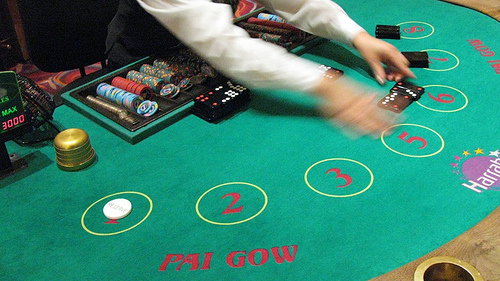 Pai Gow poker is an American card game based on the Chinese domino game, Pai Gow. The major difference in the two games is Pai Gow poker is resolves using cards and not dominoes. The game was invented in 1985 by Sam Torosian and Fred Wolf. Sam Torosian owned a casino in Southern California, but his lawyer told him card games could not be patented. When other casinos began copying the game, they did not have to pay Mr. Torosian and his associate. Fred Wolf, who was a manager at a Los Angeles casino in the 1980s, also receives credit for helping the early development of the game, along with Super Pan-9.

These days, Pai Gow poker is a favorite with gamblers who are risk-averse. A hand of Pai Gow poker plays out fairly slowly. Also, the game has many pushes, where the casino and the player tie and no bets are paid either way. While players can go on nice streaks and can have requisite bad luck, these game mechanics mean players (usually) can play long sessions without losing all their money.

The deck used in Pai Gow poker includes 53 cards. The cards comprising this deck are the standard 52-card poker deck, along with one joker. Seven players can sit at the table at any given time. Seven cards are dealt to each player, so 49 active cards are dealt each hand, while 4 cards are burnt or go in the discard pile. If the table doesn’t have the full seven player compliment, then seven cards are dealt to the empty seat as if a player was sitting there, then moved to the discard pile by the dealer. In some California casinos, a “dragon hand” is dealt to the empty seat or seats. When using the dragon hand rules, players have the option to take on the betting action for this hand, in order of betting for that round.

Two Hands in One

In a hand of Pai Gow poker, everyone is dealt 7 cards. With these cards, the player must make a 5-card hand and a 2-card hand. An equal size bet is made on the outcome of both hands, so the player must pay attention to both results. The only stipulation binding the player’s decision is the need for the 5-card hand to outrank the 2-card hand. So you couldn’t make the two-card hand as an ace-ace hand and the five-card hand a jack-jack-8-4-2 combination, for example. 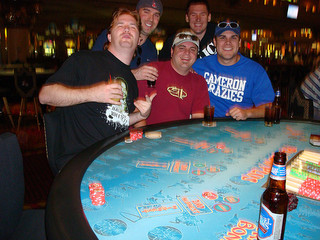 The game uses a banker, somewhat like baccarat does. The banker is determined by rotation of banking duties clockwise around the table. When a session begins, the first banker is determined by some random means, either through dice rolls or an electronically generated number. Betting starts from position 1 to position 7. The banker for that particular hand is always considered position 1 for betting purposes.

All tied hands go to the banker, which provides this gambler with a house edge on the hands they bank. Readers should not confuse tied hands with pushes, because pushing works differently in Pai Gow poker. An example of a tied hand would be the banker and a player each receiving a pair of queens. In this case, the banker would win the hand. A push happens when a player win one hand and the banker wins the other. For example, if the player won the 5-card hand and the banker won the 2-card hand, this would be considered a push and no money would exchange hands. For a player to win money, he or she would have to win both the five-card and two-card hand. The same would go for the banker, though the banker would win any hands that are tied (example: each holding Q-Q).

When the banker wins money, the casino receives a 5% commission. Players used to other games might find this to be an extravagant amount to receive in commission, but keep in mind this game has many pushes. Because a significant number of hands won’t have money changing hands (or has the banker losing), the commission won’t come into effect nearly as often as other games. When a player plays the role of the banker, no stipulations regulate how they build their hands (besides the standard rules of the game). Players who don’t want to have to cover all the bets made at the table have the option to co-bank with the casino. In these cases, the player must build hands according to the “house way”.

Some casinos stipulate that the house will bank games. In this case, the dealer builds hands in the house way. This is a prearranged set of rules which stipulates exactly how the casino’s hand must be built, much like the hit/stand rules in blackjack or the banker rules in baccarat.

As a general rule, a player should set the highest 2-card hand possible. Keep in mind the results of the two-card hand count as much towards winning the wagers as the five-card hand, therefore those two cards have an added weight in comparison to the five cards in the other hand. Certain situations dictate this general rule shouldn’t be followed. Tables exist which gives detailed basic strategy instructions for playing hands, but these can be complicated from the perspective of many new gamblers.

If you have trouble figuring out which way to play your cards, you always have the option to have your hands played the house way. While this doesn’t assure optimal play, most sets of dealer rules optimize to a great degree the cards’ advantage.

Most online casino on the Internet offer Pai Gow poker. The rules of the virtual versions of the game different from one software company to the next, but adhere fairly closely to the rules stipulated above.